The US midterm elections produced a surprising result should teach both Democrats and Republicans valuable lessons.

Looking at the most recent US midterm elections through traditional lenses, Democrats have much to celebrate. The electoral shift away from the sitting president’s party is more muted than in usual midterm elections. Democrats will retain control of the Senate, but the House will be controlled by Republicans, albeit only by a slim margin. Thus, the expectation that Democrats would suffer severe losses turned out to be more of an exaggeration. These results reveal some interesting lessons on the American political zeitgeist as it relates to both parties.

Do the Midterms Represent a Republican Repudiation of Trump?

Traditionally, political incumbents in the US suffer various disadvantages. First, Mueller’s “coalition-of-minorities” effect states that no matter what the winner does once in office, it will not live up to what was promised on the campaign trail. As a result, voters typically either don’t vote or they vote against the incumbents in the midterms. It was expected that Republicans could have achieved positive gains by doing the bare minimum of pointing out the sad state of “Biden’s” economy. Another disadvantage suffered by incumbents is that those who turned out in the presidential elections are usually less enthusiastic about the midterms; this is especially true for Democratic incumbents in recent years. In midterms, generally, the elderly and people who have an easier voting experience vote. Trump, however, has completely derailed these general predictive trends observed in past midterm seasons.

Anecdotal evidence in the immediate aftermath of the midterm elections points to what some are calling “Trump exhaustion” as political distancing from Trump seems to be brewing among conservative pundits. Midterm candidates who embraced a Trump-centered strategy find themselves in a more precarious position than before the elections (e.g. Rick Scott, who led the midterm campaign for Republicans, and Kevin McCarthy, who did not oppose the strategy as House Minority Leader). Other prominent Republicans have shown a drive to distance themselves from the de facto flagbearer of the party. Reports of Trump’s decreasing competitive viability in a potential 2024 campaign add fuel to the fire. Trump’s gamble to frame these midterms as a referendum on himself instead of on Biden has backfired.

However, this election season was also the most opportune moment for such internal strife to play out within the GOP. Just two years since the 2020 presidential elections – and the January 6 insurrection – it was impossible for Republicans to draw the spotlight away from Donald Trump because he commands constant media attention, especially in battleground states.[1] The strategy of letting Trump take the lead has its weaknesses, however, especially as displayed by the results of the midterm elections.

First, the public is more if not equally tired of Donald Trump when compared to Joe Biden. Putting Trump on the ballot drives turnout, including those who want to obstruct Trump. Negative partisanship is on the rise and increasingly serves as an electoral driver. The more this election became a repeat of 2020, the more candidate particulars lost relevance, and the vote became nationalized around the figure of Trump.

Second, Trump’s populist brand of charisma can hardly be transferred to other Republican candidates, especially those who oscillate between Trumpian style and traditional conservative statements. Populist rhetoric at the local or state level runs into a demand for specificity. It is much easier to craft a notion of “the pure people” at the national level than within local electorates. Generally, populists benefit from a myopic focus on the leader, so Trump’s attempts to lend his appeal to other candidates didn’t succeed.

Finally, “never Trumper” Republican candidates were almost entirely weeded out in primary contests, leaving those who rode Trump’s coattails to represent the GOP and often lose to moderate Democrats. Generally, those Republican candidates who stood their ground between established Republican principles and Trumpian fantasies were the ones who succeeded in winning their races.[2]

Trump thus occupies a precarious position. Ron DeSantis romped to victory in Florida and seems to be in a position to challenge him in 2024. The Florida governor presents the best mix of Reagan-inspired conservative “respectability” and Trumpian political entrepreneurship – the difficult recipe that Republican elites have been trying to master for the past decade. There is no time to reinvent the party before 2024 and burying the Republican Trump craze at this stage would be premature.

Therefore, some saw Ron DeSantis as a weaker presidential candidate than Trump before the midterms, but the tables have begun to turn. Still, the immediate aftermath of disappointing midterms is not the best time to bury Trump. The Trump formula is clearly more adapted to presidential than midterm contests and his media savvy remains far superior to that of DeSantis. An aggressive anti-Biden Trump remains a strong potential candidate for 2024 – or at least a troublemaker that cannot be ignored.

Why Democrats Should Hold Off on Celebrating

The Democrats’ victory in defeat is a clear positive sign for the “Party of the People”. However, invitations to the jamboree shouldn’t be sent out just yet.

First, a divided government – with the Democrats controlling the Senate and the Republicans the House – is problematic for two reasons. Objectively, a divided government is less productive, and given the difficulties that the Biden administration had in overcoming the objections of the most moderate wing of the Democratic Party (e.g. Manchin and Sinema) over the last two years, enacting major pieces of legislation will prove to be even more difficult with a Republican House. It wouldn’t be surprising if we see gridlock lead to a government shutdown within the next two years.

Moreover, from a strategic perspective, it would be a risk to interpret the results as a clear win for the old Democratic guard (exemplified in Biden, Pelosi, and Schumer). Instead, these elections should be seen as confirmation that the anti-Trump strategy works; but for how long? 2022 saw the rise of no new Democratic darlings who could capture national attention.[3] This means that the prospect of an 81-year-old incumbent running for president in 2024 remains the most realistic scenario for Democrats.

Furthermore, the prospect of gridlock until 2024 does not bode well for Democrats. If the presidential race is no longer about obstructing a reviled opponent (Trump), Republicans and Democrats will be left to blame one another for the impending inaction that looms over the next two years. The excitement of having a Washington outsider and/or populist – DeSantis, Trump, or someone else – will give Republicans an edge. Besides, it remains to be seen whether voters in 2024 can still be turned out by compelling non-economic issues such as democracy or codifying abortion rights.

Ultimately, there is little precedent to draw from on the trajectories of democracies that withstood the rise of their first populist leader. The dosage of populism in GOP strategy will be a key element in the run-up to 2024. Turning completely against Trump is not a tactic that Republican strategists can hope to pull off within two years. His base is here to stay and here to remain vocal and rowdy. Combining Trumpism with traditional conservatism requires a reining in of Trump, or other presidential candidates to embrace more populist styles. How well Republicans will be able to manage the balance of the two incompatible approaches is difficult to tell.

Relatedly, Democrats have three paths to choose from. First, they can try to form a convincing platform that placates the fears of those who voted for populists, but that seems rather unlikely. Second, they can ignore the populists altogether at the risk of political instability. Third, they can keep on driving anti-Republican/Trump turnout without pointing too much attention to economic performance and policy specifics. Given the groundswell of disaffection among constituencies that used to be captured by Democrats, this strategy is also risky as shown in some border states where Hispanics are turning to the GOP. The paths of both sides will spell the fate of American politics over the next two years. For now, Democrats can take a breath of relief, but like Bill Clinton, they’d better hold off on inhaling.

*Adrien Halliez is a PhD candidate in political science at Georgia State University specializing in American politics and political psychology.

[2] The list includes J.D. Vance in Ohio who had name recognition thanks to the success of his book Hillbilly Elegy, Ted Budd in North Carolina who campaigned more as the “Biden-agenda crusher” than as Trump’s crony, and Sarah Huckabee Sanders, the new governor of Arkansas who combines visible experience under Trump with a name and a past pointing to the “Moral Majority” conservatism burgeoning in the 1980s. Those who ran personality-centered campaigns in a more amateurish style were penalized (e.g.: Oz, Walker, and Lake).

[3] The Democrats who received national attention in the battleground states do not have the presidential potential of a DeSantis or even a Youngkin. Abrams suffered a second successive loss in Georgia, this time more resoundingly. Warnock and Fetterman received more coverage as barriers to their opponents than as potential national rising stars in the party. 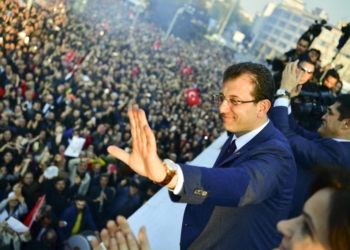